For most organizations, it’s no longer a question of whether to move from classic IBM Notes and Domino applications, but rather how to do it. 93% of our respondents have an action plan for Notes applications and data.

We asked the Notes/Domino community what they were planning to do with their existing Notes and Domino applications and data. We wanted to know which of two paths prevailed – application modernization or migration to other platforms. Here’s a summary of what we learned from 235 respondents:

IBM Domino – the health of the platform

The survey found that slightly more respondents are modernizing their Notes/Domino applications compared to those that are migrating. 36% opted for modernization, 32% for migration, 25% for a mix of the two and 7% had no plan. Let’s dig a little deeper into these results.

We should take into account that almost all respondents are still actively involved or interested in IBM Notes and Domino (only 4% have completed their transition to other platforms). So, this survey depicts the point of view of the existing Notes and Domino community in 2016. The organizations that have already abandoned the platform are not represented here.

Furthermore, one out of every four respondents (25%) is using a “mixed plan”, that is, the modernization of some of Notes applications and the migration of others at the same time.

Let’s take a look at what kind of applications have commonly been migrated (or are being migrated) to other platforms, and which will be retained on Domino.

According to the survey data, Notes-based CRM and HR applications have typically been migrated to various commercial solutions. Notes-based document libraries are replaced with SharePoint/Office 365 or other ECM repositories. For general-purpose team collaboration, companies choose from a variety of social and collaboration software solutions such as IBM Connections, Microsoft Yammer, Jive and many more.

Does this mean that highly customized collaboration applications will be the key reason for sticking with Domino (and XPages) in the long run?

Not necessarily. While XPages is the obvious modernization choice for many, and Domino is considered a proven NoSQL database platform, our impression is that many companies that reported the “mixed plan” are also going to give up Domino as their application platform. According to their comments, many of them are currently continuing to run Domino only to be able to access legacy applications and historical data.

IBM Domino is not a strategic platform

The fact is that the fate of the platform’s survival in big companies is not in the hands of developers and administrators. Instead, it is a result of other dynamics such as organizational mergers and acquisitions, rationalizations, platform consolidations and migration to the cloud. To that we could add IBM’s track record of missteps in the last decade (which some respondents were commenting on quite eloquently) and come to a final conclusion.

And that conclusion is that, put simply, IBM Domino is no longer a strategic platform. It hasn’t been a strategic platform for years now. And this fact determines the platform’s future more than any item in the list of technical features and benefits. When an organization decides to abandon such a platform, they don’t have to rationalize their decision. It is a self-fulfilling prophecy now. 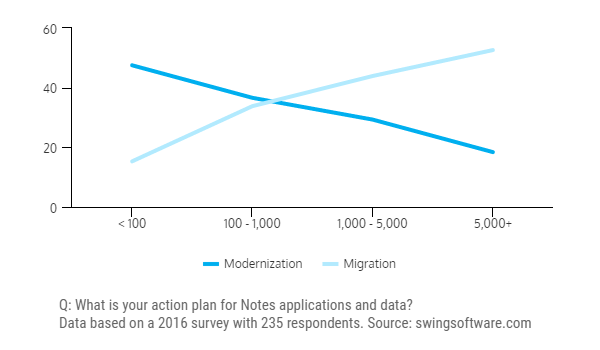 Whether migrating or modernizing, 43% of respondents (and 53% of those who are migrating) indicated that they would like to archive Notes application data outside of Notes/Domino.

Roughly half of respondents want their Notes data to be retained independently from the original platform, and for a good reason. Application archiving is now a key step in both migration and modernization undertakings.

Large organizations are especially interested (55%) in platform-independent retention of Notes data due to compliance and legal requirements. When they feel the future of a platform is uncertain, they want to properly preserve historical records before it becomes too difficult or too expensive to do so.

But if your organization stays with Domino, why should you want to extract Notes data? Because it makes you less reliant on the Notes client. In this way, you can keep Notes documents long after the original application has been retired.

On the other hand, if your organization decides to shut down Domino servers and migrate to another platform, you will probably need to migrate Notes data. The question is, which data? All the documents from Notes databases including historical data accumulated through the years? Or just a smaller subset, e.g. a year’s worth? Will you need to export the whole documents? Or just metadata? The list goes on.

Because Notes forms and data in classic Notes applications are tightly coupled, it makes data migration difficult. There is also the information context, contained in document relationships, links, views, attachments and metadata, which also has to be accounted for. This is why all organizations are increasingly aware of the implications of properly archiving Notes data.

Migration to the cloud? Not so fast

Less than half of respondents (47%) are currently looking to migrate some of their applications that used to be running on Notes/Domino to the cloud (53% – no such plan at this time; 36% – yes, some of the apps; 11% – yes). 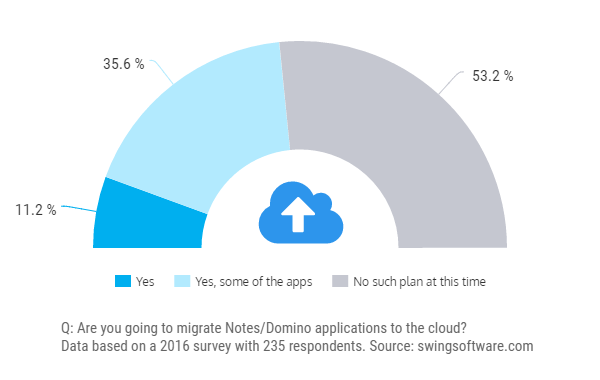 We believe that migration to the cloud generally goes along with platform and application consolidation. It is commonly a unique opportunity to rebuild legacy applications (or to find a SaaS alternative) and to repartition functions across the application portfolio to better match business needs. For legacy Notes/Domino applications, however, it is rarely a one-to-one migration.

The plurality of respondents (39%) picked IBM as a cloud provider of choice, either exclusively or with other providers. Microsoft comes in a close second (32%).
It seems that IBM has an attractive proposal for Domino developers: Among these companies that opted for IBM’s cloud, almost four out of five (78%) will be migrating some or all of their Notes/Domino applications to the cloud.

IBM Bluemix might be a new home for Domino data. As several respondents pointed out, XPages is considered a bridge to IBM Bluemix. With XPages for Bluemix, IBM will attempt to “lift and shift” Domino NSF databases to the cloud and draw Domino developers to Bluemix.